© BLUE HOUSE GALLERY, MAIN STREET, SCHULL, COUNTY CORK, IRELAND
All images are copyright of the Artists and are not to be reproduced without express permission
website realisation john@bigboydesign.co.uk © 2015

Angela Fewer qualified as an architect from University College Dublin and worked for many years as an architect both in Ireland and abroad. She returned to college as a mature student and obtained a degree in Fine Art from the Crawford College of Art ,Cork.

Architecture has been a dominant influence on her work . She brings her interest in  the manipulation of space and structure into her paintings. The work hovers between abstraction and representation.

There are many influences on the work. The Avant Garde artists of the early 20th Century in Russia have been a considerable influence – particularily the artists of the Constructivist movement such as Tatlin. The  artists of St. Ives are also an influence –especially Ben Nicolson .

Her work process consists of making many sketches and drawings  at the chosen site and photographs taken . These are then conceptualised and abstracted in the paintings.

Heir Island in Roaring Water Bay off West Cork is of special interest with its inlets, cliffs and shoreline, providing a special island landscape – a close relationship between land and sea in a never ending pattern and structure.

The work is inspired by the layering and weathering of the landscape, the diagonal lines and patterns in the landscape , the vertical and horizontal bands of ancient rock found around our coasts, the sea the sky.

Water is one of the fundamental elements of which our plane is made, rock in another. Cliffs are the meeting place of sea, land and sky. These elements are conceptualised and abstracted in the paintings.

Angela has exhibited widely both in Ireland and abroad. A recent residency at the Ballinglen Arts Foundation, North Mayo, gave Angela the time and space the further explore her interest in landscape painting. 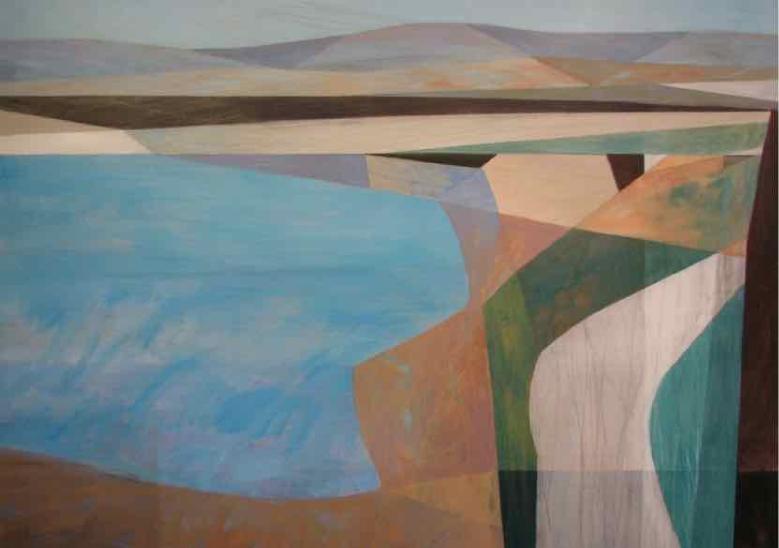